I was probably 8 or 9 years old at the time. I remember fiddling with my grandfathers shotgun in our ancestral home in India. Ammunition for the gun sat in a rustic tin box in my grandmothers armoire.

I was probably 8 or 9 years old at the time. I remember fiddling with my grandfathers shotgun in our ancestral home in India. Ammunition for the gun sat in a rustic tin box in my grandmothers armoire.

A handgun lived in one of my grandmothers chest of drawers and I was allowed to touch it and admire it, maybe a couple times.
I was never deterred from fiddling with the gun or as I put it - making myself familiar with it. I do remember not having the upper body strength to open the barrel of the shotgun to load it. My father noticed my predicament and bought me and my brother an air gun that used pellets as ammunition. It was a fine looking air gun with a beautiful wood stalk. It was a bit heavy though and I had some issues handling that as well. Due to the lack of strength, my father taught me to use the floor (barrel facing down) as a base to help insert the pellets. I'm pretty sure that was not the correct way to re-load the air gun and guess what? - it broke! I'm pretty sure it's still hiding somewhere in the house. Unsure if it ever got fixed.
I had fun with it. Now that I look back, I was not responsible with it at all. I don't remember being instructed - 'Don't aim at something you don't intend to shoot,' 'Don't aim at the birds,' 'Don't point the gun at another human being.' Unfortunately, I’m guilty of all of the above.
During the afternoon when everyone was indoors resting or taking a nap, I would sneak it out, fill it with pellets and go around the courtyard aiming it at anything and everything. All was hunky dory (as per me). Honestly, even if someone saw me, a neighbor or someone walking down the street, they wouldn't care. Gun laws in India are very different from that in the United States. They’d probably duck to avoid getting hit, and go their merry way.
That was the extent of my exposure regarding firearms, until I married into the culture. It’s that wise decision that led to my most recent experience.
Thanks to my husband, I was provided with an amazing opportunity of attending a 4-day defensive handgun training course at Front Sight Firearms Training Institute located in Pahrump, Nevada.
I accompanied my husband with an open mind as I really didn’t know what to expect. My husband, an avid shooter, has received training at Front Sight quite a few times. We didn’t enroll in the same course, though. I believed I’d be nervous training alongside him as he is way ahead of the game.
As I mentioned, I went with an open mind. I was very curious and excited. Not everyday do you come across an opportunity to train to become a responsible gun owner/handler. Based on my experience with guns, I believe I needed this training the most.
Day 1 was an eye-opener. I was a beady-eyed pupil trying to take in as much as I could - which was a lot. The first day included trainer and trainee introductions, basics about firearms and parts, stance/posturing, do’s and dont’s, accompanied with a couple of presentations. We had to report to the training site at 7am and left the site a little before 6pm. Yeah, it was a long and hot day and I wasn’t adequately prepared. Icing on the cake was that we got to shoot our guns on Day 1.
I slept like a newborn puppy that night. 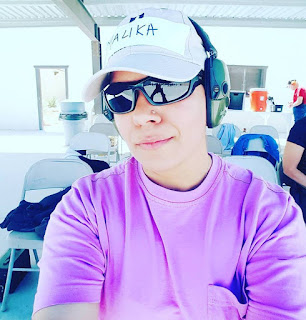 As I said earlier, I wasn’t quite prepared on Day 1 which prepared me for Day 2 - meaning a packed lunch, ample gatorade, water and snacks to hold me throughout the day, all achieved via a late night run to Walmart in pajamas!! The training site provided plenty of sunscreen and water - Thank God! 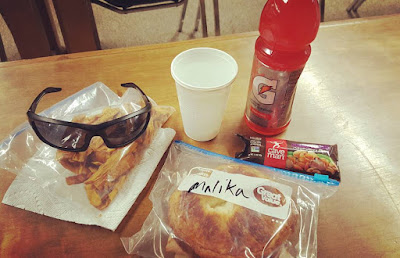 The course was very structured and timed. I can see someone getting frustrated because of the durations and temperatures on-site, if it wasn't. Day 2 was more hands-on as compared to Day 1. We did a lot more target shooting and I think I did very well. For the duration of the course, everyone had a fellow-coach (also a trainee), and I was lucky to have an experienced coach to assist/correct me along the way. I'm surprised she didn't give me the nickname - Finger off the trigger!!
Day 1 also included very important instructions such as - ‘Treat every weapon as if it were loaded,’ ‘Never let the muzzle cover anything you are not willing to destroy,’ ‘Keep your finger off the trigger and outside of the trigger guard until you’re ready to shoot,’ and ‘Be sure of your target and what’s inline with your target.’
It’s quite clear why I needed this training the most. Trust me, as these very important instructions were being drilled into my mind, those warm afternoons in India were recurring in my head. Did I chuckle at my naivety? - Of course!
Slept like a bit wiser puppy that night!! 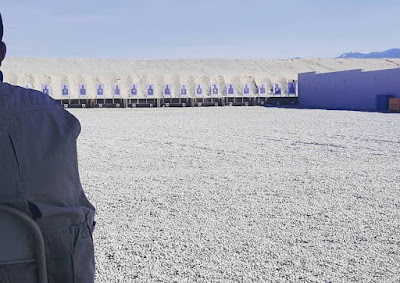 Following Day 2 we moved on to chamber and magazine checks, loading and un-loading, grip, after-action drills, the three secrets - Sight Alignment (how to correctly align your front and rear sights), Sight Picture, and Trigger Control (still working on this one), re-loading, malfunctions (3 kinds - Failure to Fire, Failure to Eject, and the hardest one (for me) Feedway Stoppage), and presentations. Additionally, I learned how to operate a gun when or if concealed (open front and closed front).
Day 4 was the most fun but also unnerving since we were going to be tested on what we had learned during Days 1 through 3. Tests, especially timed, make me incredibly nervous. Each trainee had the opportunity to graduate either as a Distinguished Graduate or Graduate. The remaining trainees received an Achievement Certificate. I proudly announce that I am an Achiever!!! 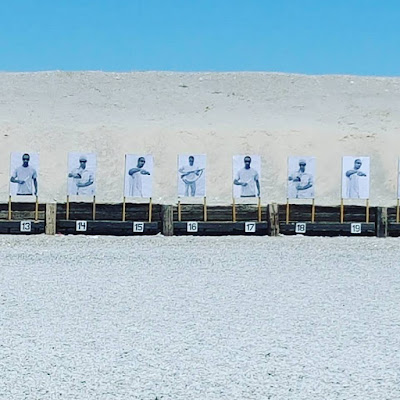 I had some malfunctions with my gun on Day 2 because of which I had to use a different gun for Days 3 and 4. That put a slight damper on things as now I was using a different gun. Also, I was able to properly get the slack out of first gun which aided in better aiming, than the second gun. I understand that that comes from practice.

After the testing concluded, and everyone was less anxious, we did some fun target shooting and participated in a game. One of the activities for the day was to put the name of your loved one on the target and aim in order to save their life from the bad guys. You can see how I faired below.
My boy is safe at home!! 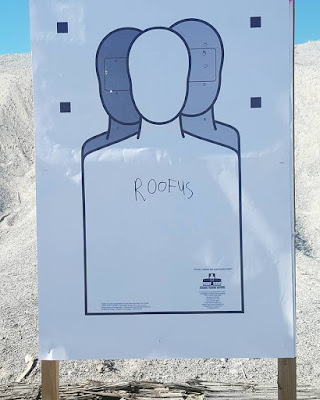 I learned a great deal during the course and can’t wait to return. I’d like to give a shout-out to the very patient and knowledgable trainers. They were very polite and ever-ready to help and explain the issues at hand. Along with becoming a more responsible gun owner, I think I shoot better. I have a long way to go and will make a point of doing dry practice while at home. Front Sight provides a very helpful handbook which aids in dry practice.
Thanks for this incredible opportunity, babe <3