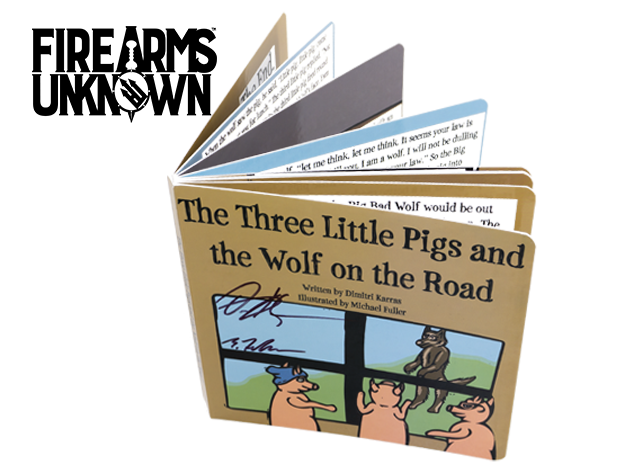 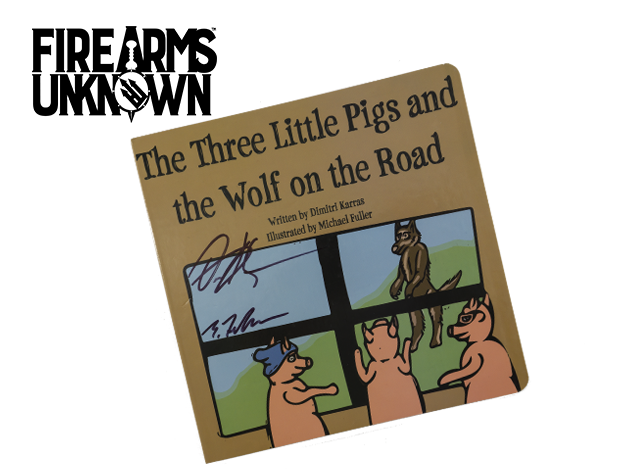 We have sold out of the signed version. For the foreseeable future, these will no longer be available. We are not allowing backorders on this version. However, you can order a copy of the unsigned ones here: https://www.firearmsunknown.com/the-three-little-pigs-childrens-book-guns.html

This is a retelling of the well-known children's tale in adult form, The Three Little Pigs. Whereas the original story taught a great lesson on the importance of hard work and perseverance, this version focuses on the more modern issue of political laziness. While it may seem to some that government and its attempted monopolization of violence is the answer to every ailment of society's soul, that sort of sophistry will lead you to smack your head straight against the brick wall of reality.

1. The government will not be there to help you when it matters.

2. The people most generally affected by gun regulation are people who were not a threat anyway.

3. Violence, contrary to popular adage, does, in fact, solve problems.

In The Three Little Pigs and the Wolf on the Road, our characters learn these simple truths the hard way.

Disclaimer:   Warning!  This book is not intended for use by children.   The content in this book is adult themed and contain adult premises and themes that may be offensive to some.

This is the first book in a new series written by Dimitri Karras and illustrated by Michael Fuller; there will be many more to come.

You can also watch it being read for free on youtube:

Well, I read it to my young children. At first there were the understandable tears. The next morning I woke up to grinding metal noises in the garage. I paused. There’s no way.

I creeped into the garage and low and behold my 6 year old daughter is tack welding 1/2” steel to her power wheels.

I shed a tear and had a silent whimper. I’m man enough to admit it.

In this house; we’ll be fine. Thanks firearms unknown.
Add your review
5 stars based on 2 reviews