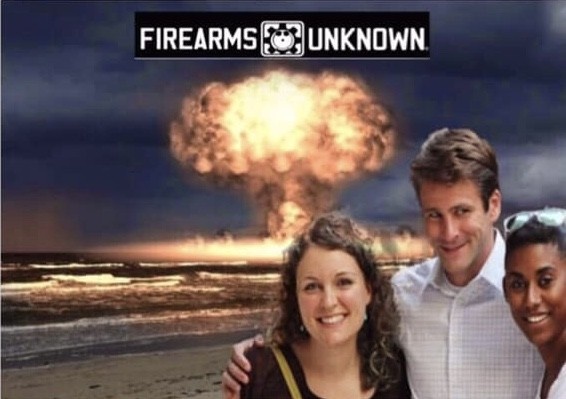 Is it your dream to live in a world where happily married polygamist pan-transexuals can defend their coca fields and child-labor workforce with tactical nuclear missiles? Do you like To have a good time? Have you always wanted your own recreational nuke?

Every order will include:

We reserve the right to refuse service to anyone. (KIM, PLEASE STOP CALLING US)

Just a Happy lil Capitalist
25-01-2022 21:06
Beautiful device from FU, every time the neighborhood Karen knocks on my door in an attempt to instate an HOA I just flash the detonated and she goes running. Annoying mormons? Just flash the detonator! Annoying Ex wife demanding alimony? You guessed it! Just the mere presence of this device has increased my penis size by 6 inches (however I think it may be because of the radiation sadly). Sadly had to use it when my neighbors were mowing their lawn and a blade of grass fell on my driveway, A-10 was in the shop so I was forced to resort to more “desperate” measures to protect my property. Thankfully I won’t be receiving anymore noise complaints from my neighborhood as there’s no more neighborhood left, or city for that matter. Only giving it 4 stars though because apparently I’m now on some “FBI watchlist” and there are federal agents outside my underground doomsday bunker now
Andrew
24-11-2021 17:21
Everything came exactly as described, with the exception of the PU 239, it was at the end of its half-life and wasn't putting out nearly enough energy to spark. After a few angry entitled emails to FU I got my replacement. Easy assembly, and my buddy Dan likes it
Aladeen
17-10-2021 06:15
Finally a doom weapon to strike fear in my enemies. Remember round is not scary, pointy is scary! Don't be an idiot like nuclear nadal. Last thing I need is people laughing at a giant robot dildo coming their way.
Some Random Mercenary Group
07-10-2021 17:36
Great for landing zones, really softens up a hot area before we need to insert. Costs money but saves a few of our guys lives out on the field.
Ligma CAt
15-09-2021 04:21
Old man burt go up in fucking flames and boom boom cloud when I press little red button that came out my ass. Very good to kill the pesky pussy cat next door.
ARis WhIteyyy
15-09-2021 04:10
I thought that the wait was unnecessarily long, but it was worth it when I devastated my neighbours existence and his pesky ferret. The outrageous fools stepped on my lawn and I needed PAYBACK. This was perfect. Somehow the ferret survived though….also helped relandscape most of the south part of Adelaide.
John
15-09-2021 04:08
This goes kaboom when I press the red button, is good bought to defend house form cat. Cat is gone now so is the city thank you!
Ur mum
15-09-2021 04:08
It go boom when old man step on lawn
Usman al-Yousef
17-07-2021 20:54
Mashalllah! Blessed are the creators of this tactical nuclear weapon! This product worked perfectly and effectively in Afghanistan and, soon enough, will work great in the filthy Jewish land of Israel. The infidels and kafirs shall all be engulfed in fire, in the name of Allah, supreme lord of the universe. May the creators of this product gain entry into Janat al-Firdous and be blessed with 72 virgin women.
Turk McGhurkin
27-06-2021 21:39
Purchased this because I'm having problems with my unruly neighbors. On reflection, this probably wasn't the best answer considering the fairly massive blast radius. I did however assemble mine in my garage with common hand tools.
Incel
08-12-2020 22:54
Perfect for the ultimate beta uprising
Kim Jong Un
08-12-2020 22:48
The product worked as advertised, although I'm disappointed that they're out of stock right now, as I'd like to order more as quickly as possible.
Jack McNasty
19-10-2020 23:43
Keeps the local robbers away, safe enough for the kids to play with and eventually become nuclear engineers. Of course they have developed cancer from the excess radiation, but at least none of them have to worry about child support....ever.
The Manhattan project
18-10-2020 16:09
So... I have bought 5 of them and they are just fun to brag about not only that but its warming feeling is very good to use as a heater
Pinochet
05-10-2020 08:38
a lot more effective than helicopters, but not re-usable
Minarchist Nilai
04-09-2020 14:30
The Mc Nuke did exactly what it advertised it would. Quite happy with the product. I was able to conquer Pyongyang from Burger King with it. Thanks McNuke!
Arc
27-08-2020 20:16
Possibly one of the more expensive options on the market out there, however ever since I got a McNuke I've been the talk of the town, at least until that damn Brownell family tried to blow snow onto my front lawn, now there isn't much of a town left.

Thanks, McNuke!
BoatSalesman99
05-08-2020 08:09
Honestly the reason for the single star score was due to lack of child protection safeties - we bought this initially as a birthday party prop as my son who just turned 9 had seen Dr Strangelove. Of course we had our party out in the country well away from anyone, but naturally as kids are, they have to push buttons. As we were headed to the party (fortunately about 44 miles away, we didn't want to risk it too close to home and my uncle owns a some land) my son was playing with the detonator and managed to somehow enter the sequence we put in. And poof, mini mushroom cloud in the distance...

However if it had not been for the lack of child protection measures, I'd rate this a solid 4. It showed up in a timely manner, nothing missing, operated as it said it would. I wouldn't give it a full 5 because I never give a full 5/5 on my reviews. Thanks
Pladamir Vutin
05-08-2020 00:24
Приличный, но я видел лучше. Для моих друзей на юге, это будет работать для ваших нужд.
Dewayne Elizondo Camacho
04-08-2020 23:45
Took care of those tough stains with ease. Removed years of built up grease. As an added bonus, it eliminated the need for follow up maintenance. Thanks, McNuke!
Vlad
13-07-2020 23:42
Let me be clear; this is not the absolute BEST home defense weapon, but it is more than capable of protecting your home(land). For the TLDR customers, I would recommend purchasing.

To start, the 2 McNuke's I ordered arrived just over 2 years, which I initially believed to be an unreasonable amount of time, but realized just how reasonable it was when the FFL I chose gave me a call saying that the delivery process was relatively painless as it only required a semi and a rented crane. When I arrived, the McNuke was packaged in a large wooden crate, inside of its own personal insulated lead-lined crate. The container itself was extremely high quality and the unpacking process was the most satisfying I have ever experienced, even more so than an iPhone.

The McNuke itself is made of very high-quality materials. The main shell is made from high grade 7075 aluminum, and the warhead is constructed using a high grade 4170 steel, which was cold-forged. Now, there are no fins like those you might see on a nuclear bomb dropped from an airplane, instead, it is a reasonably small package that can be placed as a mine of sorts in the yard. Now, there are attachment options for fins so that you could drop it from a larger plane (will need something larger than a Cessna 172). The weight of the package is decently light, at around 500lbs, largely due to the materials used.

As far as actual uses, I have only been able to test one out, and the results were astounding. To be perfectly clear, I did not use it in my own household, I tested it about 50 miles outside of the city I live in. The test subjects were some of the local cartels that we had run into out at the testing range. When the McNuke was triggered, it almost immediately exploded and instantly eliminated the threat. I was using a Geiger counter to measure the radiation released from the explosion which was very modest, given the high yield of the warhead.

All
Can Be Bought With Bitcoin
Firearms Unknown